The LeSS website has some great diagrams and text which cover the LeSS and LeSS Huge frameworks. Even more detail can be found in the three LeSS books written by Craig Larman and Bas Vodde. For someone who is new to Scrum the level of detail can be a little overwhelming. The following series of diagrams and associated caption text attempt to explain the LeSS meta-process is nothing other than a very natural generalization of single team Scrum.

The diagrams will walk through the derivation one step at a time, explaining the reasoning behind each step. The end result will be what mature professional Scrum teams have done for years, which turns out to be exactly what LeSS has canonized as the LeSS framework.

Unlike many other approaches, LeSS places a great deal of focus on addressing the underlying organizational structure necessary to establish a supportive culture. LeSS also assumes and requires excellent engineering practices. Very little of those critical aspects are detailed here as this sequence of diagrams is focused on the events, roles, and artifacts of LeSS.

People who have spent any time in a classroom setting with me will recognize these diagrams are very close to what I scrawl on a whiteboard. Unlike most other digital versions you will find, these have been specifically designed to be whiteboard scrawl friendly. 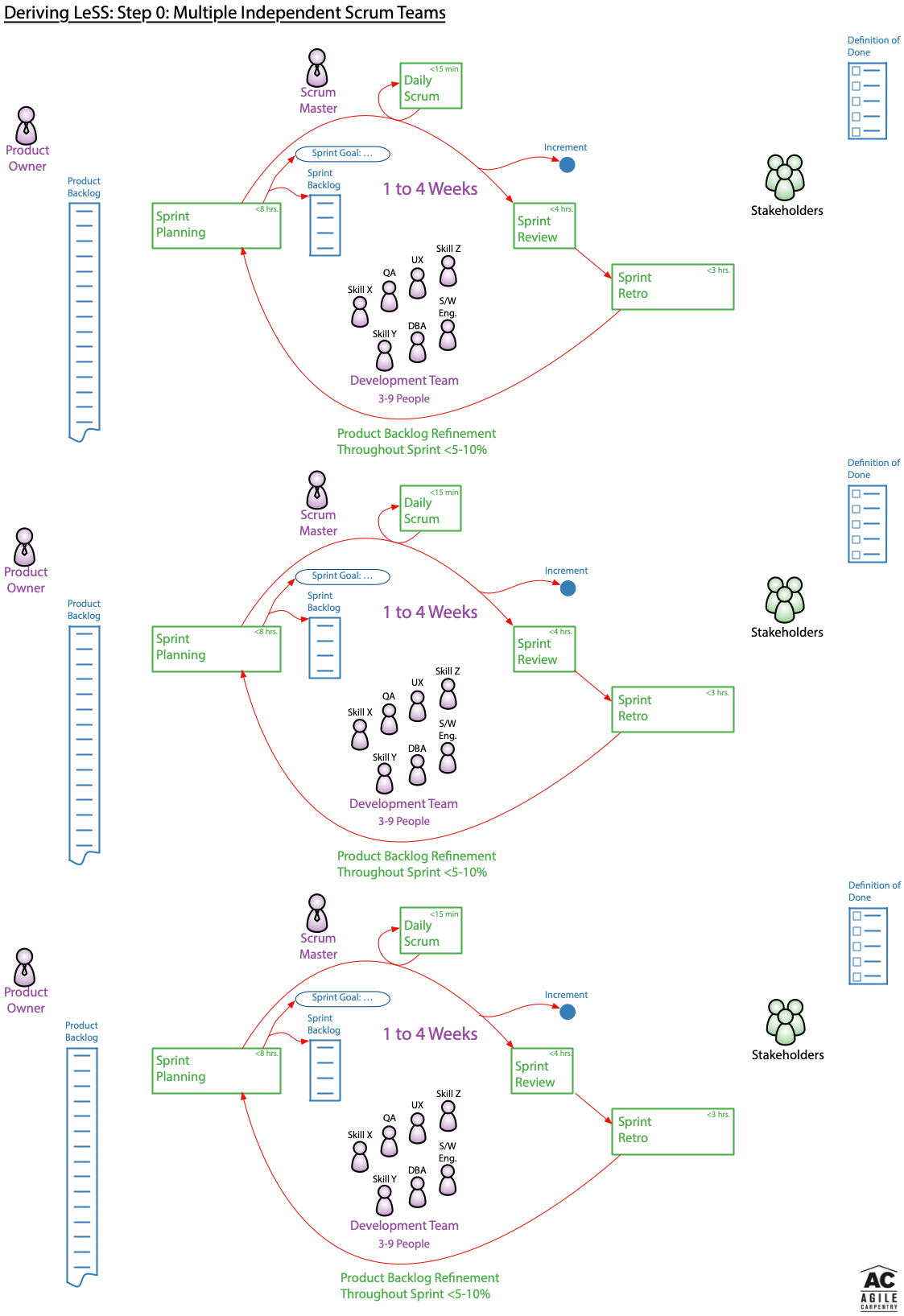 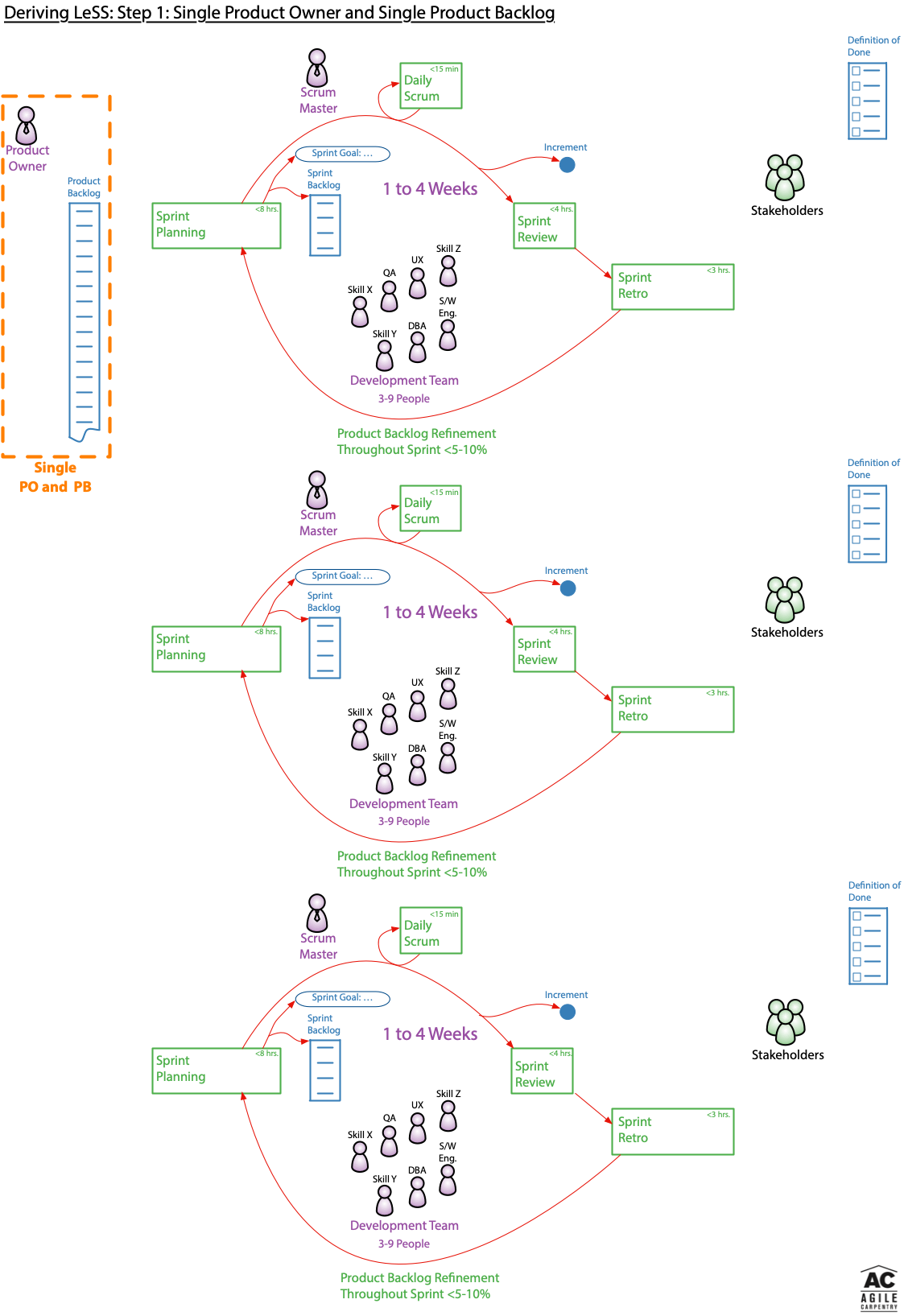 Delivering value to the stakeholders requires there be a complete Increment which combines all the completed work from every team while including all the valuable functionality from previous increments. All the reasons for this in single team Scrum are equally valid with multiple development teams. In a pure software engineering context this is typically achieved by going even further and ensuring the entire codebase is always continually integrated while simultaneously being continually shippable. Only by continually producing a shippable fully integrated increment is it possible to drive sufficient coordination between all the development teams and to squeeze out the majority of the technical risk. 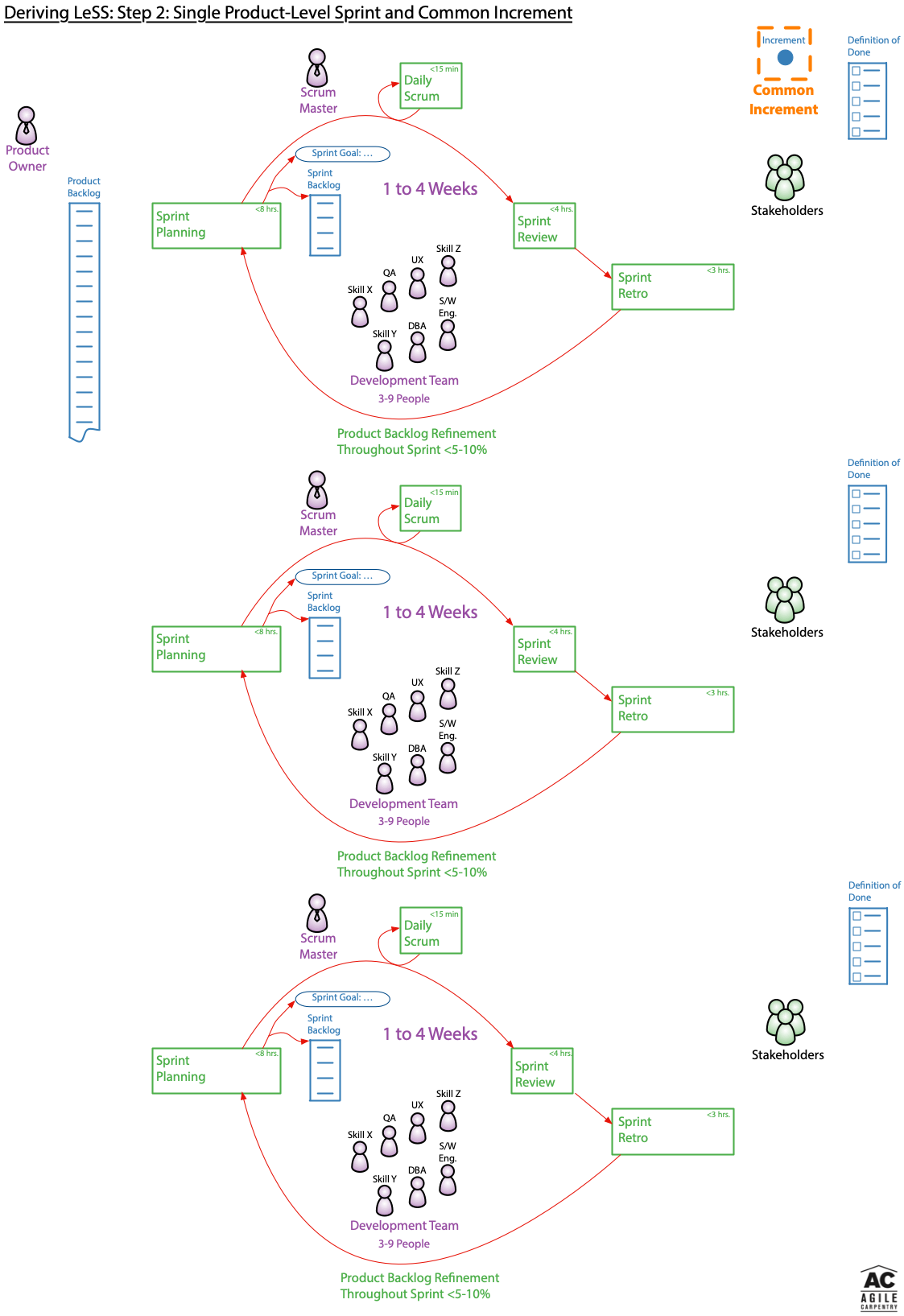 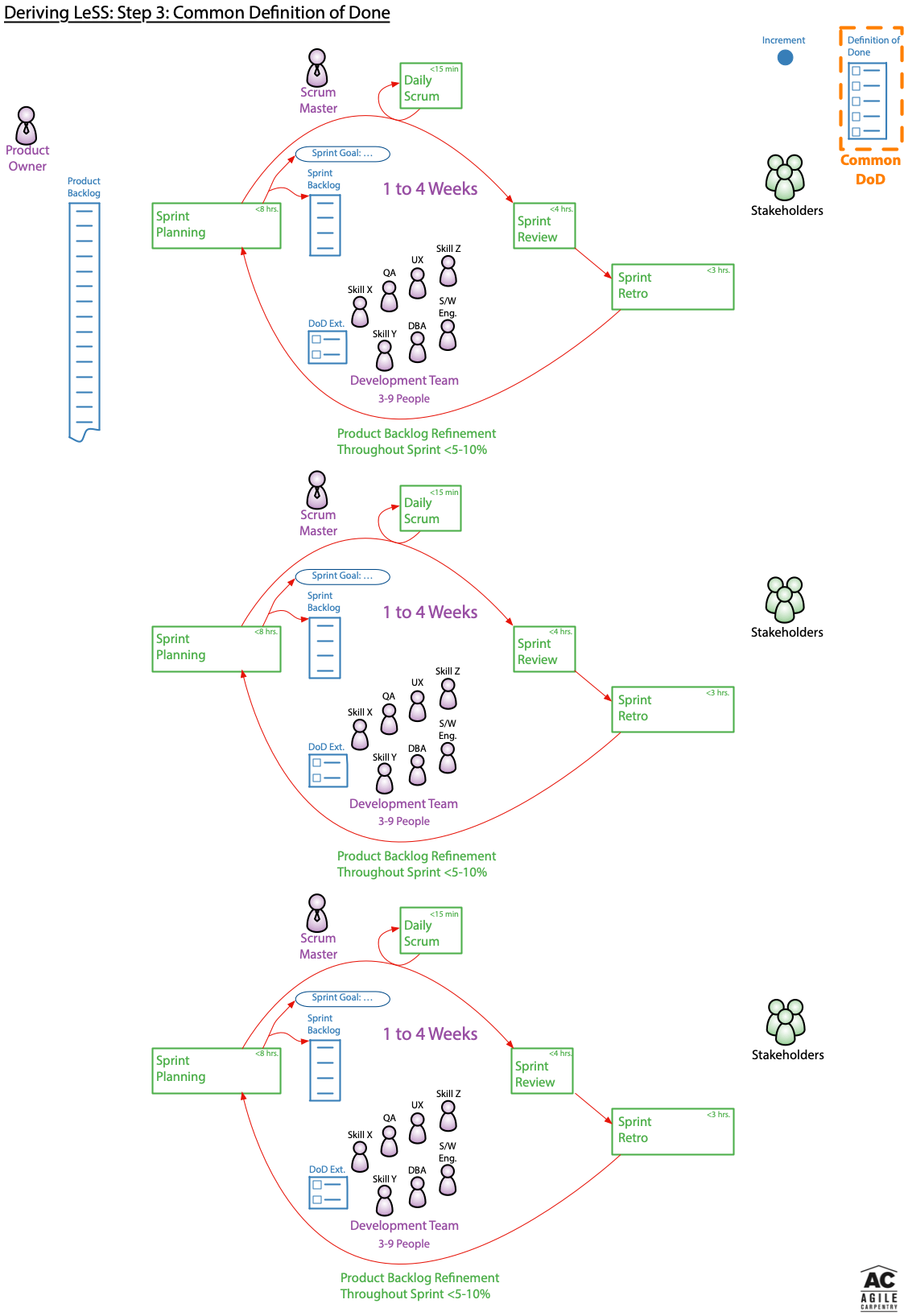 We now have a common Increment taken to a common Definition of Done, and a single common Product Backlog representing the product direction of a single Product Owner. The Stakeholder’s perspectives don’t change based on which development team happened to work on a specific PBI from the Product Backlog. It only makes sense for everyone in the Product Development Group and the Stakeholders to collectively review the Increment, discuss upcoming plans, and explore any changes in the market conditions in a single event. Therefore a single common Sprint Review is the natural choice, and exactly what LeSS does. 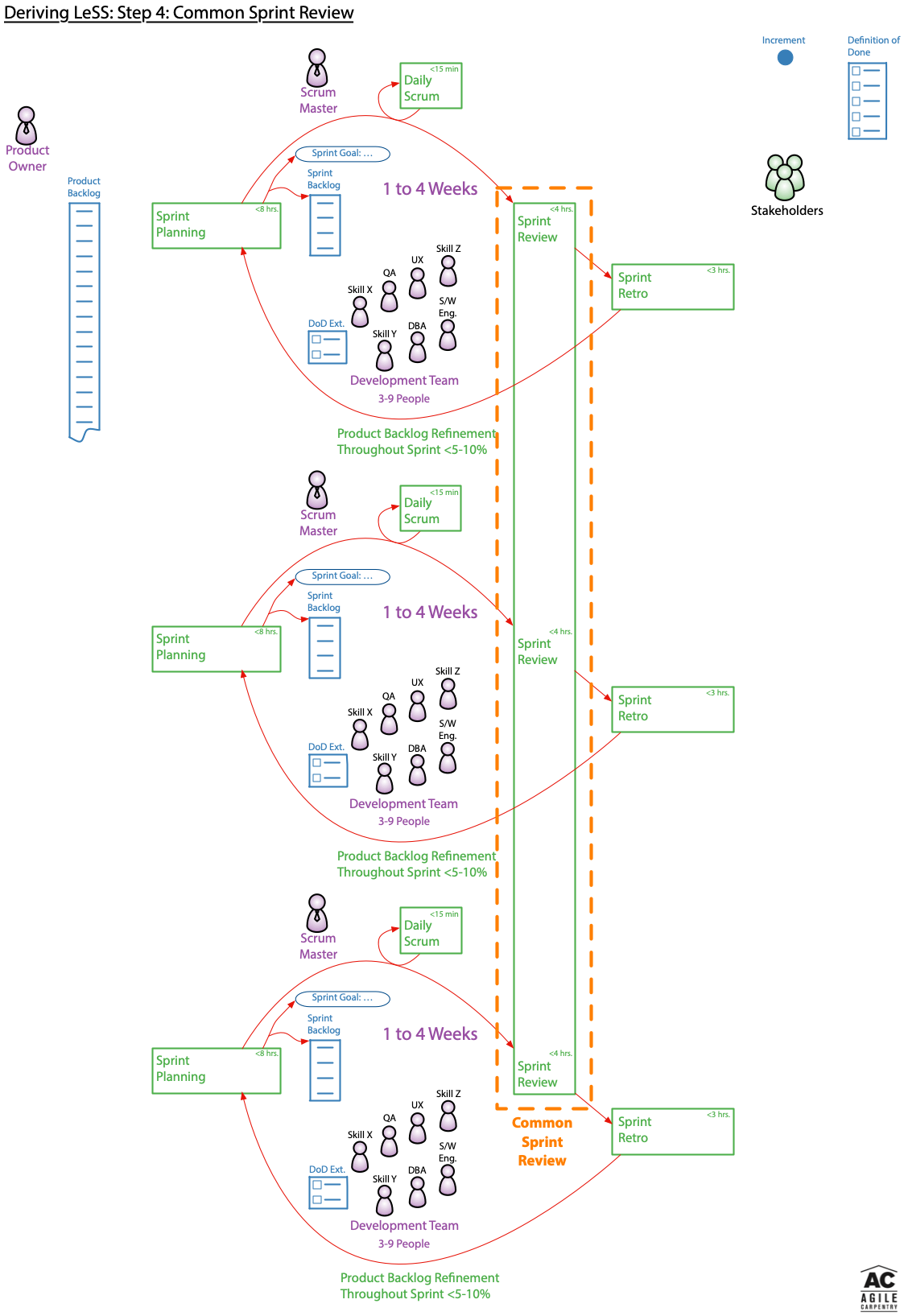 During Sprint Planning each self-managing, cross-functional, co-located, and long-lived team has a need to plan out it’s own work with enough fine grained detail to feel confident in their Sprint forecast. So it stands to reason that each development team needs its own Sprint Planning event to do this detailed planning.

As each development team performs their detailed planning they are very likely to discover aspects which require additional coordination with one or more of the other teams.

Interestingly, the ability to decide which team is going to work on which item requires that all teams are familiar with all of the PBIs towards the top of the Product Backlog. Hence the necessity of Multi-Team Product Backlog Refinement (PBR) which is discussed in Step 8.

The flexibility to wait until Sprint Planning for the teams to decide which team is going to work on which PBI is further enabled by reduced specialization. In other words, the LeSS structure naturally pushes teams in the direction of developing whatever skills are required to most effectively deliver the greatest value possible.

Once again, the LeSS framework’s approach to Sprint Planning aligns very naturally with all of the above considerations. 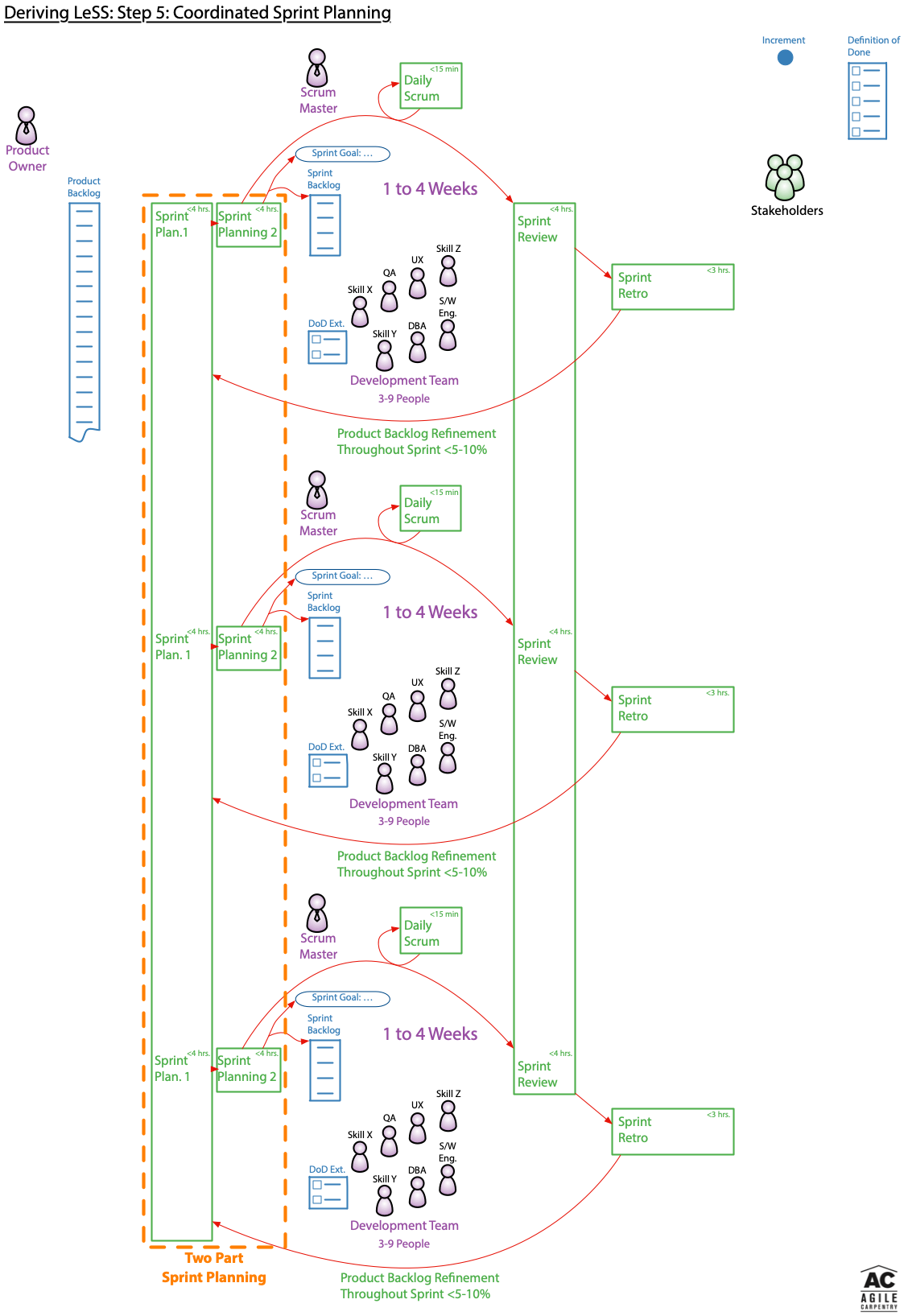 The LeSS framework’s prescription for addressing both intra-team and cross-team retrospective needs is to have team level retrospectives followed by an overall retrospective. If you carefully read the LeSS books you will also find the suggestion to occasionally run retrospectives at other scopes as well when it makes sense to do so.

Again, no rocket science just the natural thing to do. 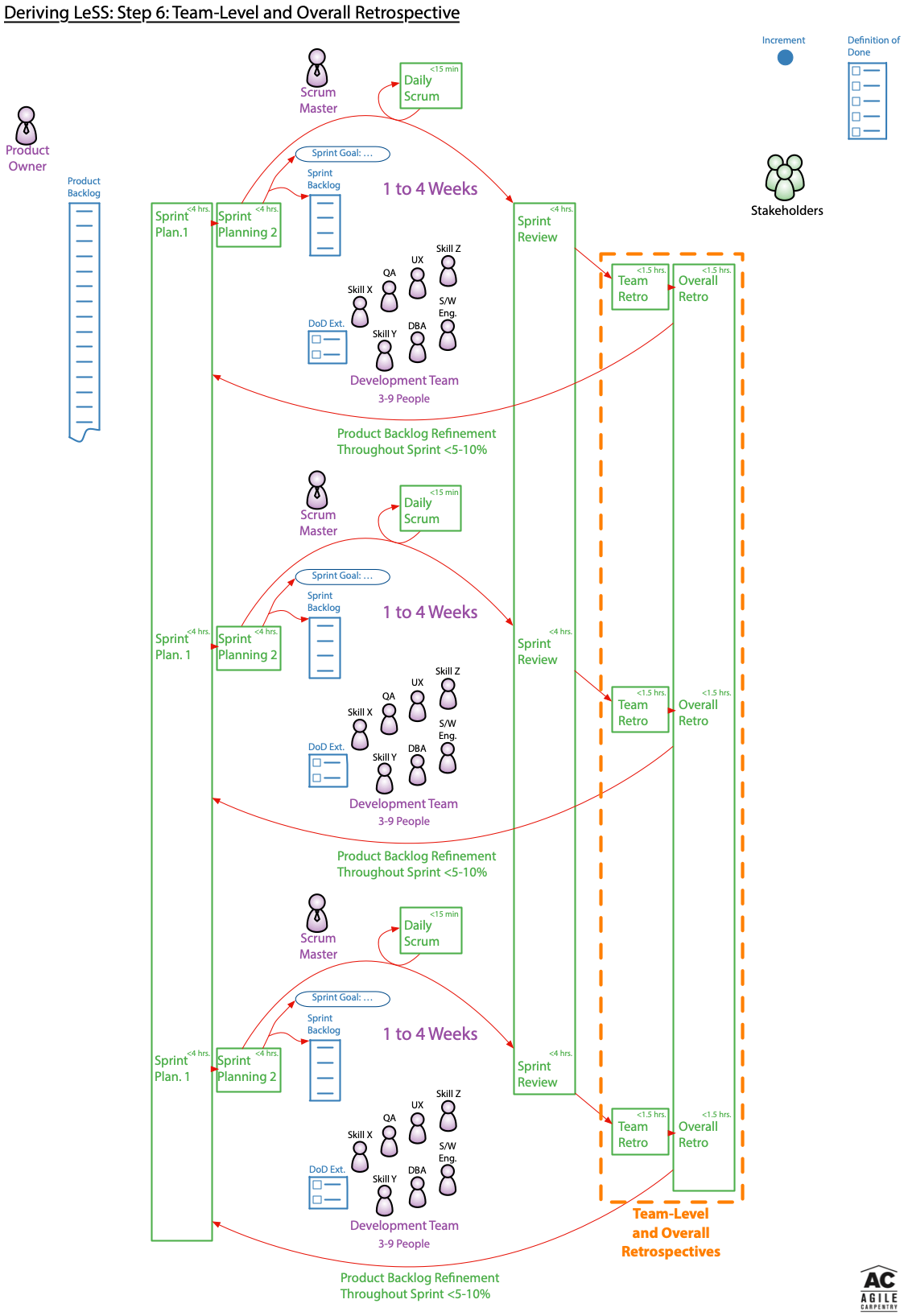 Single team Scrum is not perspective as to whether the Scrum Master is a fully dedicated role or not. LeSS takes the position the Scrum Master workload with multiple teams is enough to benefit from requiring the Scrum Master role to be a full-time role serving no more than three teams.

Once the teams have been up and running for a few sprints the Scrum Master workload with multiple teams tends to come from the challenges of continually working to address more systemic organizational issues. It is important to remember each self-managing development team is managing it’s own work, the Scrum Master is not a project manager role.

The LeSS rules regarding Scrum Masters are largely a result of empirical experience rather than self-evident easily derived rules such as having a single Increment and a common Definition of Done. That said, they are very sensible. Failure to follow them generally results in otherwise avoidable problems. 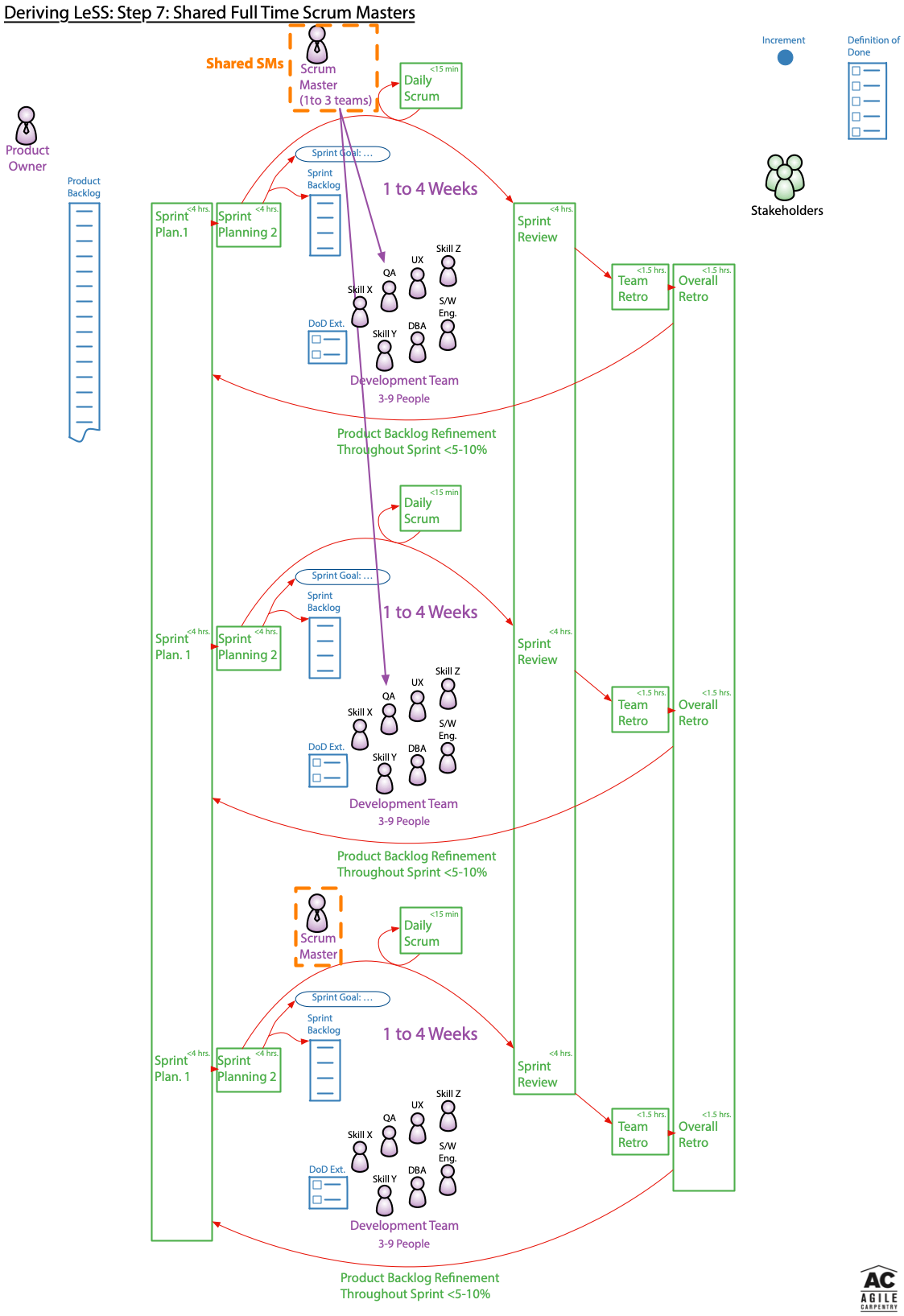 With every development team working from a single Product Backlog it often takes just a little more structure to effectively coordinate the refinement. It very often makes sense to have multiple teams perform the refinement together in a large room, ensuring any stakeholders useful to the PBIs being refined are also there. Although this ideally involves all teams in the product development group, this is sometimes difficult if there are teams in several different locations with large time zone differences. The Large Scale Scrum: More with LeSS book contains several Guides dealing with how to approach refinement in practice.

Single team Scrum refinement often involves clarification of requirements along with a bit of design. With a larger number of teams it is useful to separate Product Backlog refinement and design. LeSS guides suggest multi-team product backlog refinement focusing on clarification of requirements with customers and/or other stakeholders, along with separate multi-team design workshops to deal with design aspects which don’t require significant customer input. You will also see reference to the idea of using an Overall PBR to figure out which teams are likely to implement specific PBIs and therefore select those items for later in-depth single team PBR.

To avoid overly restricting product development groups the formal LeSS rules are a bit more lax than the LeSS guides. Aside from adding “Multi-Team” to the text about refinement there are no changes to the diagrams in this step. 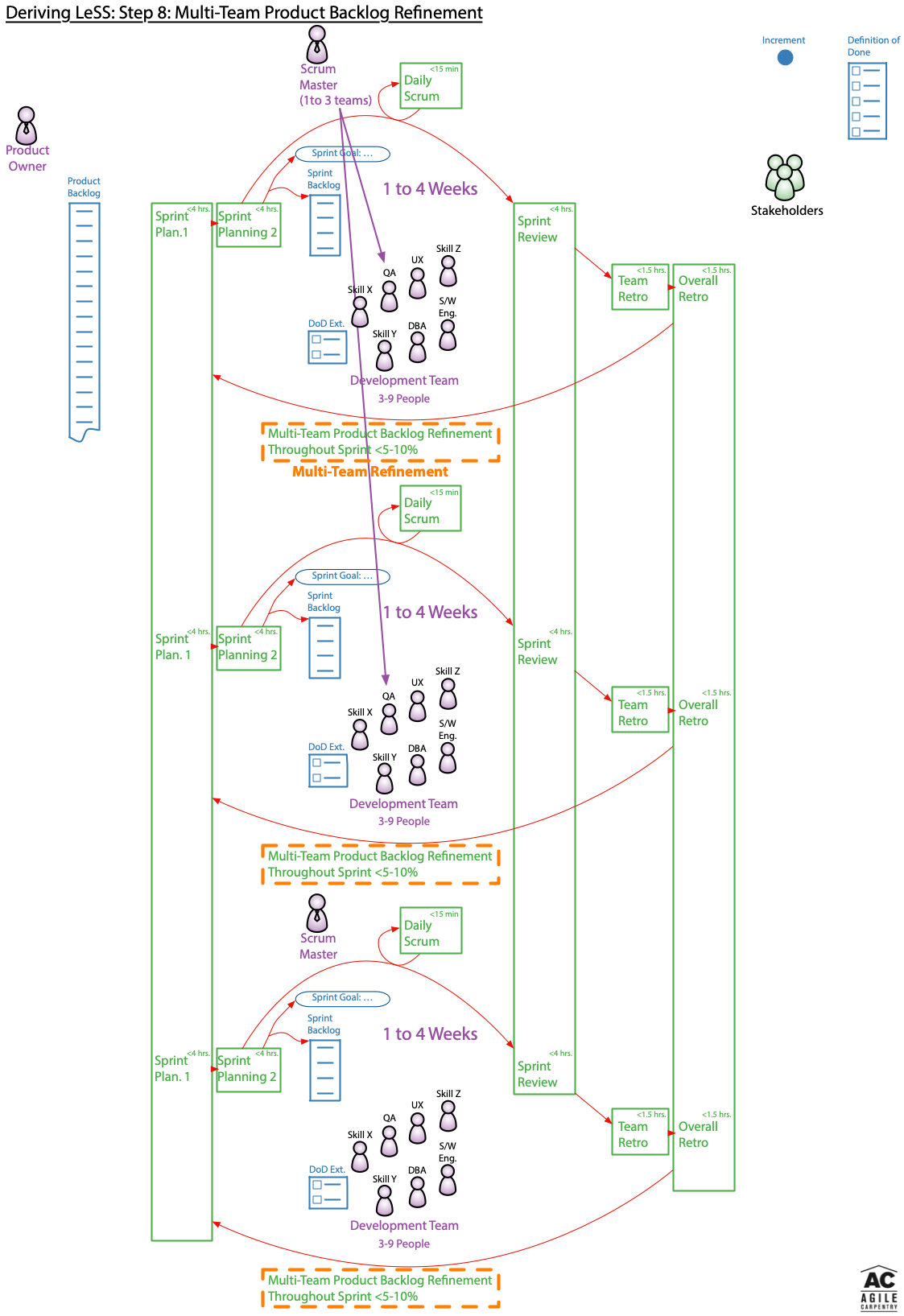 With the introduction of LeSS some of the boundaries seen in the 2017 Official Scrum Guide become ambiguous. For example, within the 2017 Scrum Guide the Scrum Team is composed of the Product Owner, Scrum Master, and Development Team. With Scrum Masters potentially serving up to three teams the definition of a Scrum Team becomes a bit murky.

The diagram has therefore been further modified to change Development Team to Feature Team to be more consistent with typical LeSS nomenclature.

The greater the number of teams, the greater the coordination burden. Therefore, with a co-located group of developers a single Scrum team with six developers is generally a more reasonable choice than having two teams of three developers in a LeSS framework. LeSS therefore suggests LeSS feature teams generally range between five to nine people. As with the Scrum Guide these are general guidelines more than a hard rule, you will even see a slight variation in the upper limit within the LeSS books and literature.

Team=Identical to the Development Team in the 2017 Official Scrum Guide. This is the self-managing team of developers responsible for turning the PBIs in their respective Sprint Backlog into functionality contained in the Increment in a manner which satisfies the Definition of Done. Both a Feature Team and a Component Team can be referred to as a Team in LeSS. The LeSS definition of Team does NOT include the Product Owner or Scrum Master.

Feature Team=A Development Team with all the skills and resources to develop a complete end to end customer feature.

Component Team=A Development Team which is only capable of working on a component of the Product. 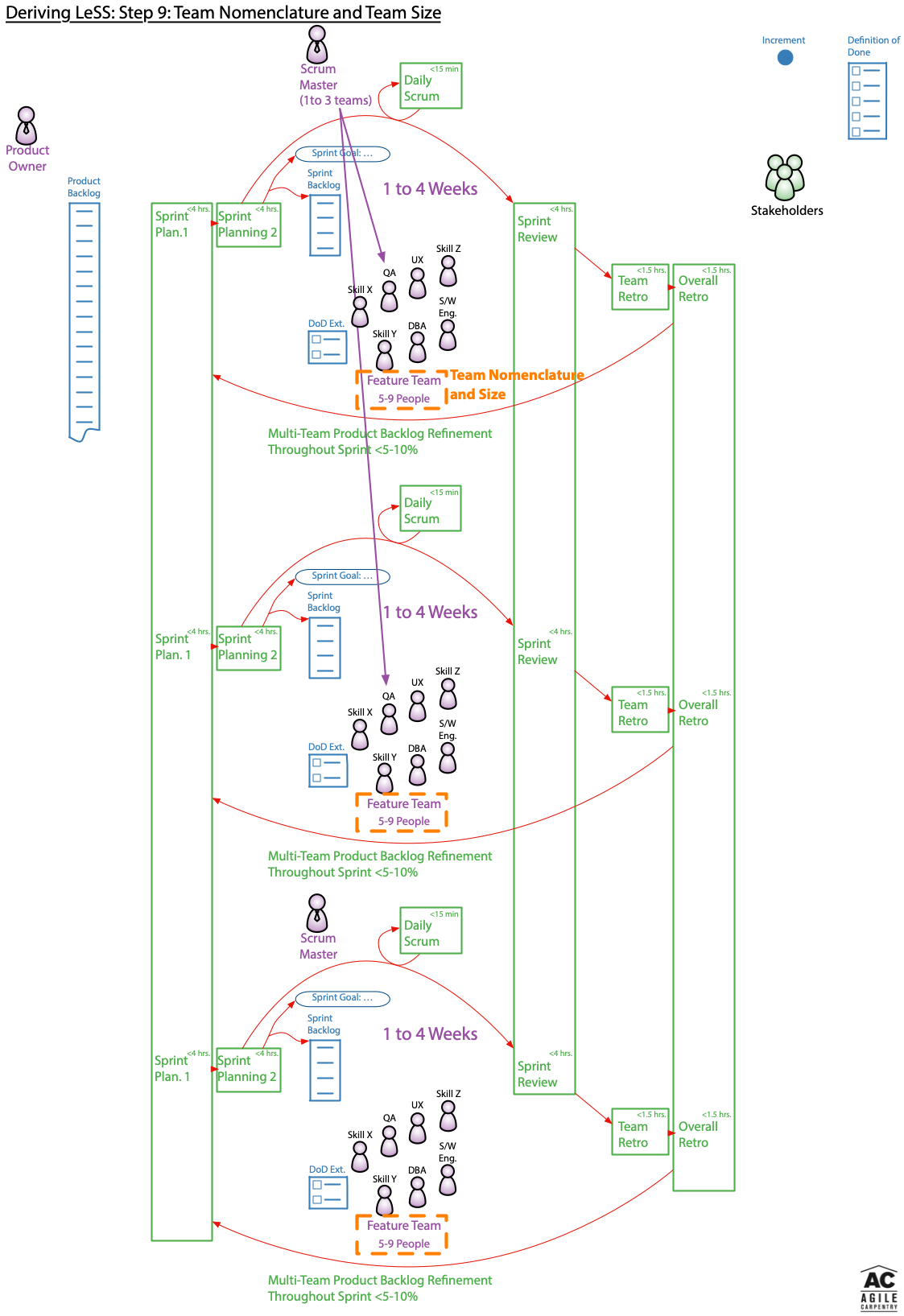 LeSS is Scrum. LeSS provides adds additional constraints to Scrum, yet it doesn’t violate anything within Scrum as it does so.

The most interesting group of additional LeSS rules relate to aspects on which the Scrum Guide is intentionally silent. Unlike many other approaches to adopting Scrum in larger scale contexts, LeSS fully appreciates the influence of broader organizational structure on culture and works to address it head on. Understanding these additional LeSS rules and the reasoning behind them is critical to a full appreciation of LeSS.

Since this set of diagrams has been focused on deriving the meta-process aspects of LeSS from those of single team Scrum, they don’t effectively highlight the last group of LeSS rules.

LeSS Rules Not Covered In These Diagrams 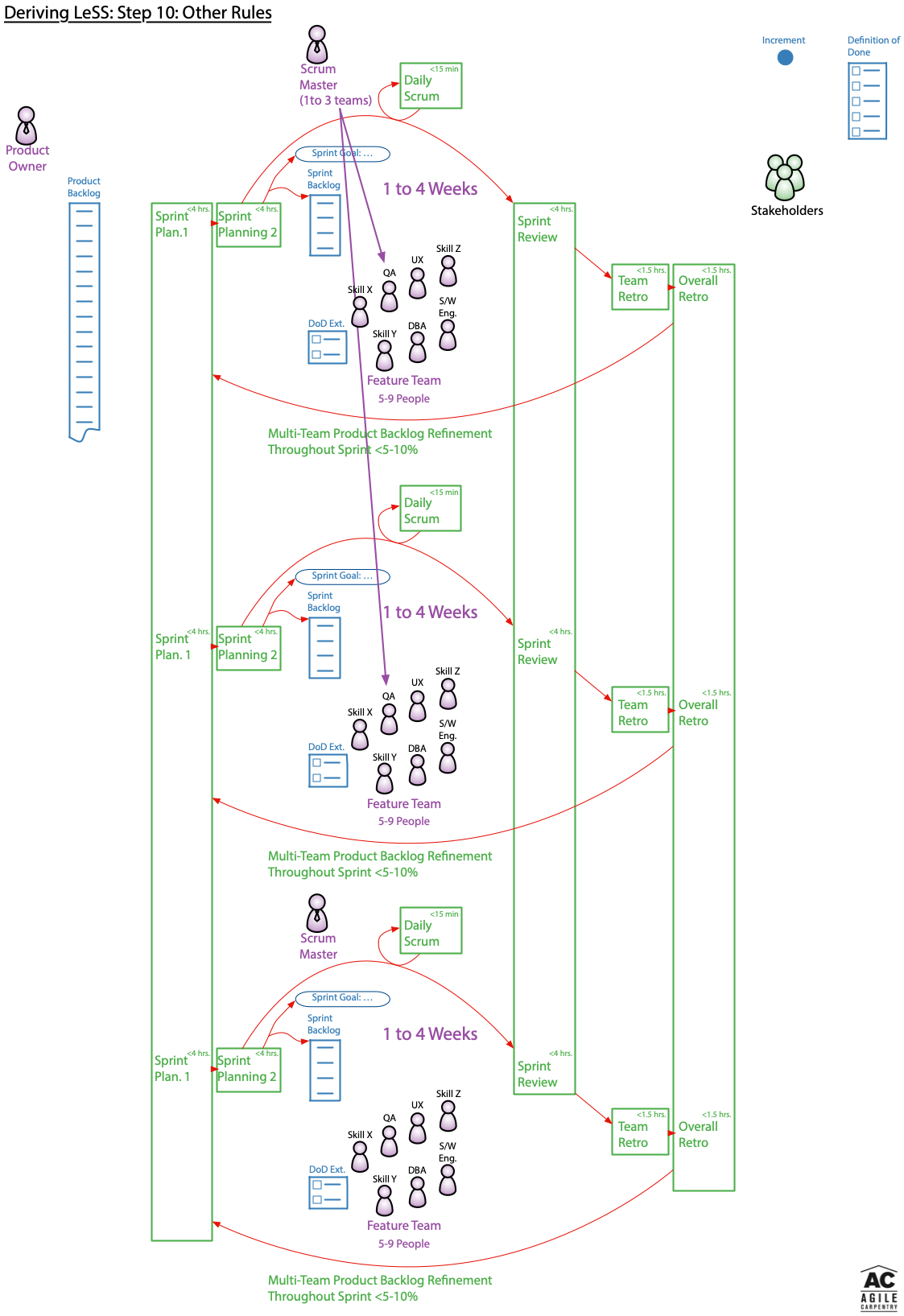 Now that you have seen how to derive the LeSS framework step by step, it is time to compare my summary diagram with the one from the LeSS website. I believe you will find it maps perfectly. 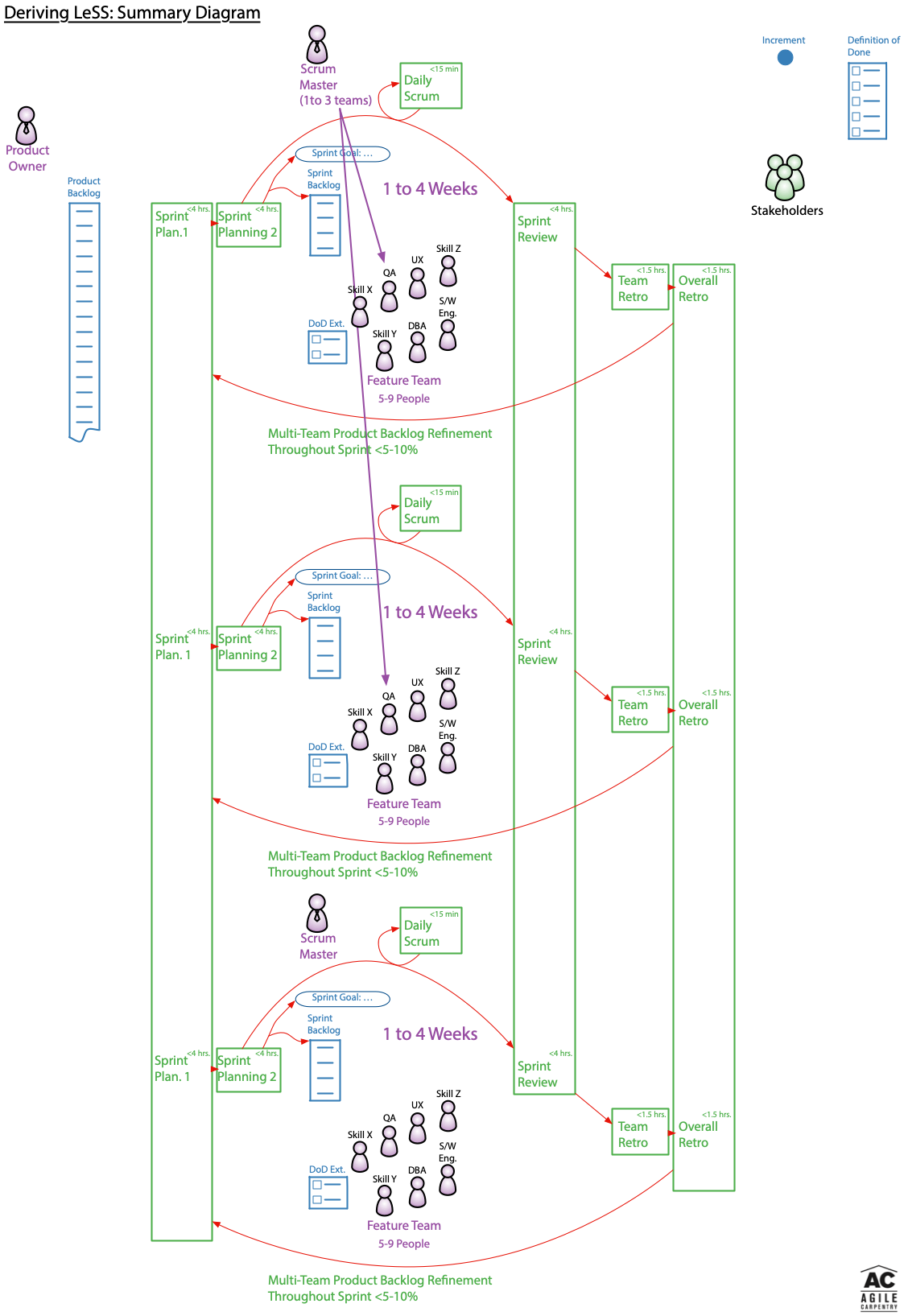 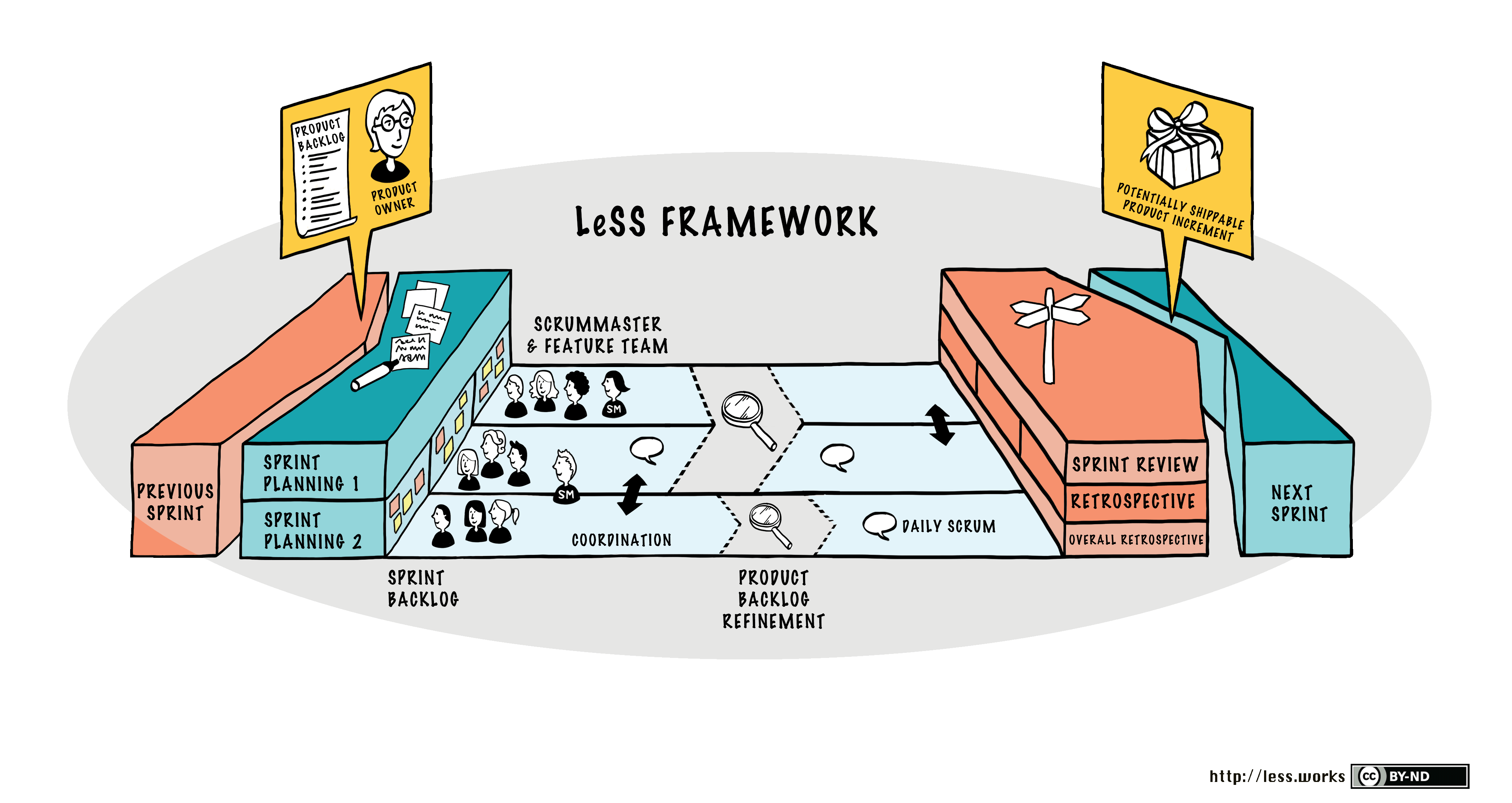 Rather than copy them here, I suggest you review the summary of the LeSS rules found on the LeSS website at: https://less.works/less/rules/index

In my follow-on Examining LeSS Huge article I explore LeSS Huge. Less Huge is only relevant for extremely large product development groups, typically those with eight or more teams.

How May I Help?

If you are trying to understand if LeSS is appropriate for your own organization, please let me know and we can schedule some time to talk. I have played a leadership role in two LeSS Huge transformations as an external independent consultant. As you can see from my LinkedIn profile I’m not your usual fluffy agile sprinkles coach, rather a seasoned (yet rusty) software engineer with a great deal of leadership and meaningful agile transformation experience.

For more serious inquiries I can share a draft LeSS case study for work I did at a past networking hardware client. My case study is not yet published on the LeSS website as I am working through various edits with Viktor Grgic and soon Craig Larman and Bas Vodde. I believe you will find my case study, book, and references will make it very easy to evaluate my ability to help you. My LinkedIn recommendations from Trevor Gamba, Dmitry Barsky, and David Stackleather are some of the more insightful ones. 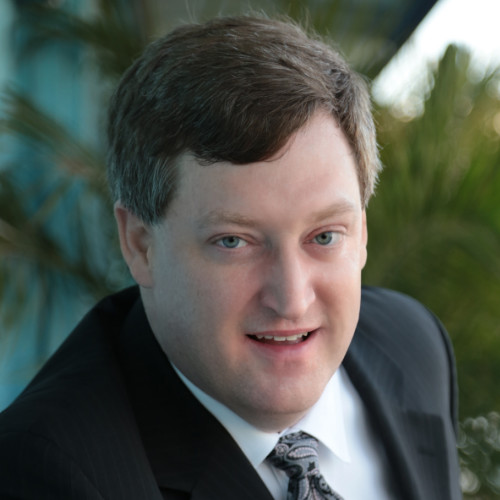